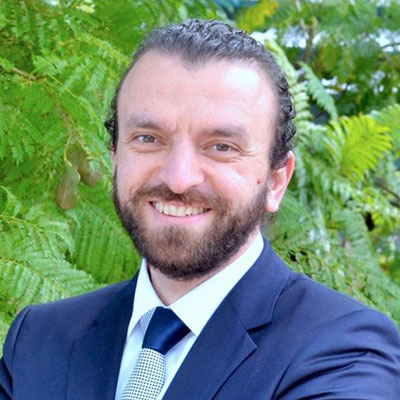 Dr. Karageorgiou was born in Glasgow, Scotland, and raised in Athens, Greece, where he graduated from Athens College and subsequently obtained his MD and PhD degrees from the National and Kapodistrian University of Athens. Upon completion of his medical studies, he worked as a post-doctoral associate at the Brain Sciences Center of the University of Minnesota under the mentorship of Apostolos P. Georgopoulos, MD, PhD, studying the encephalographic brain patterns in health and diseases such as Alzheimer’s disease, multiple sclerosis, and schizophrenia. He subsequently completed residency training in Neurology at the University of Minnesota, where he also served as the Associate Chief Resident for Research and Education. After his residency, he joined the Memory and Aging Center at the University of California San Francisco where he completed a Behavioral Neurology fellowship and an Atlantic Institute fellowship for Equity in Brain Health. He further completed a Sleep Medicine fellowship at Stanford Sleep Medicine Center, towards obtaining comprehensive expertise in the fields of sleep and neurocognitive disorders. He has served as Assistant Professor in Neurology at UCSF before returning to his native Greece and establishing the Sleep & Memory Center at the Neurological Institute of Athens, combining his clinical practice in helping patients with sleep problems and cognitive impairment with his research in the field of Cognitive Behavioral Sleep Medicine.​

Dr. Karageorgiou’s primary goal is the provision of optimal care to his patients and their families, a goal which also guides his translational research. He has been awarded the Robert Katzman, MD, Clinical Research Training Fellowship by the American Brain Foundation and the Alzheimer’s Association for studying encephalographic patterns of neurodegenerative diseases and the Young Investigator Award by the International Congress on Schizophrenia Research for his work on the early diagnosis of schizophrenia and related psychoses. During his residency at the University of Minnesota, he received the John R. Gates Award for his clinical qualities and patient advocacy and the Benjamin Shapiro Award for his research on the early and noninvasive diagnosis of brain disorders.​

Sleep Medicine, American Board of Psychiatry and Neurology​

Neurology, American Board of Psychiatry and Neurology​

We have a unique opportunity to implement community-wide interventions to improve the lives of patients with dementia. We can each contribute by engaging in social activities outside our immediate environment. We need only ask and be ready to act.