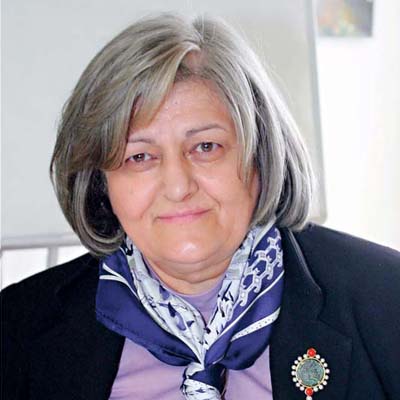 ​As a clinician, after completing her mandatory rural service at the State Psychiatric Hospital of Corfu, she returned to Athens where she served as a Neurology consultant at “Evangelismos” General Hospital under P. Hakas.  She went on to become the founding Director of the Neurology Department of Athens General Hospital “G. Gennimatas,” where she innovated the field of Neurology care in Greece, creating the first nation-wide specialty neurology clinics, the first specialized Neurological and Stroke Advanced Care Unit, an infusion Neurology day-clinic, established one of the largest Neurology training programs in Greece, having trained more than 220 residents during the three decades that she headed the department, and was the founding Editor-in-Chief of the department’s journal De Profundis [Greek]. ​

​Among her several contributions to Neurology in Greece, she is a founding member of the Hellenic Neurological Society, elected as its President between 2000 and 2004, and establishing the first fellowship grants for recent Neurology graduates to pursue post-doctoral studies abroad towards improving Neurology care in Greece. She is also the founding President of the Hellenic Headache Society and founding Editor-in-Chief of its journal “Kefalalgia” [Greek]. She has served in several committees of the Hellenic Ministry of Health, and has represented Greece to the World Health Organization.​

​Leveraging her training and clinical expertise, she has focused her clinical and research activities mostly on the fields of Multiple Sclerosis and Headache, being an author and co-author in dozens of scientific papers, and a principal and regional investigator in several studies. Her scientific contributions include immune modulatory treatments for autoimmune neurological diseases, as well as mesenchymal stem cell therapies for motor neuron diseases.​

​In recognition of her leadership qualities in health care, she was selected to organize the Special Department (outpatient clinic, inpatient ward) of Athens General Hospital “G. Gennimatas” during the Olympic and Special Olympic Games of 2004 for guests, journalists, national assemblies and representatives from all participating countries, and for which she received the Recognition Award by the Hellenic Ministry of Health. For her contributions to Athens General Hospital “G. Gennimatas,” the floor hosting the Neurology Department carries her name. For her lifelong contributions to Neurology worldwide, she was inducted as a Fellow of the American Neurological Association in 2011.​

​Since 2013 she is the founding Head of the Neurological Institute of Athens and is the Director of the Neurology Department at the Athens Medical Center, continuing her clinical, research and educational activities.​