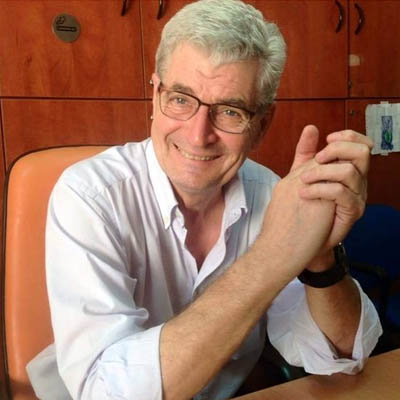 Dr. Panagopoulos was born and raised in Athens, where he graduated from Athens College and then obtained his Medical Degree from the National and Kapodistrian University of Athens. He trained in Neurology at “Evangelismos” General Hospital and subsequently pursued post-graduate training in Neuromuscular Disorders and Electrophysiology at the Royal Free Hospital, London, UK, supported by the Greek government. Upon returning to his native Greece, he served in the National Healthcare System for three decades where he established and directed the Division of Neurophysiology of the Neurology Department at Athens General Hospital “G. Gennimatas.” Through his position, he helped tens of thousands of people with neurological disorders while, in parallel, pursuing research and educational activities, establishing the Neurology Department as one of the leading Neurology centers in Greece and worldwide. He has published dozens of studies in international journals and has been an invited speaker in numerous educational conferences and seminars. Through his work, he has advanced our knowledge on improving diagnosis and therapy in neuromuscular disorders. Characteristic of his philosophy of contribution is his work in training hundreds of Neurologists in Electrophysiology who practice across Greece and recognize him as their mentor and teacher. In 2016 he joined the Neurological Institute of Athens to establish and head the Center for Neuromuscular Disorders and Motor Neuron Diseases, serving towards the NIA’s mission as an institute of excellence in promoting brain health in Greece and worldwide. In 2020 he became the NIA’s clinical director in charge of its clinical activities.​